How to Work Up to Scenarios for Your Organization

Foresight professionals like ourselves typically work with clients on scenarios in a project-based sense, i.e. scenarios are the output of formal projects with lots of “data” and rigorous process.  While that is true, we do employ what we might call “scenario thinking” all the time and in more informal ways.  By scenario thinking I mean simply thinking in terms of multiple possible outcomes – scenarios.  The awesome news is that all humans do this, and you can use your natural ability for generating scenarios to improve the strategic conversations that go on inside your organization.

To see how you can do this, let’s consider a hypothetical example (that many of us might want to try doing for real).  Workforce automation, or the notion of machines significantly displacing human labor in a new wave of automation, is one of the hottest topics around right now.  How might the vast majority of companies – which are not initiating formal foresight projects to investigate “workforce futures” – start using some everyday scenario thinking to have a more critical conversation about workforce automation?

In this example, each of the following steps represents one step up in the amount of time and energy you invest in the topic.  For those with fairly little interest or time available, you might stop after defining the scenarios in step 1 for your organization.  For those who find more interest or value the further you go in this process, you might take all of the steps.  Basically, stop when you need to and continue on while there’s value.

Create some initial scenarios based on the debates in the media.  If you just read the major media outlets, then you would still pick up at least 3 distinct workforce automation scenarios:

This is a good starting point for this “casual,” everyday use of scenarios.  And don’t worry too much about which of these scenarios is “right”; if you’ve gotten these from the major media then it’s very likely that these dominant images of the future come from the different sides in the debate.  The experts themselves will argue about which of their theories is right until the cows come home, and in the meantime you’ve got work to do…

Work yourselves into the scenario.  At your desk one day or in conversation with others, edit those three scenarios so that now the stories are about your industry.  Apply them to your context; make them specifically about what happens to your industry.

From here your organization could use these customized scenarios in leadership discussions, as starting points for wind tunneling existing strategy, and as a spring board for finding new emerging opportunities in a changing economy.

If you want to continue to refine your organization’s thinking, then conduct a little bit of lateral research and weave in some new things, while also adding a fourth scenario.  Look into things like synthetic biology, digital fabrication, and blockchain technology and go back to the first three scenarios and “edit” them to see what happens when these other technologies are introduced as important developments.  What further disruptions and/or opportunities would emerge if these other technologies became huge mainstream hits?  How would the evolution of automation in your industry change alongside these other developments?

Now add (create) a fourth scenario: Bending the Trend.  While each of the first three scenarios assumes that automation technologies will continue their rapid advance and spread through industry, scenario four forces you to stop and seriously ask, “how could this automation trend get slowed?”  What would bend (or break) this trend?  A push back from society?  Strong lobbyists in government? Other logical world events that disrupt our expectations?  What logical black swans or wild cards might change everyone’s priorities or capabilities?

At this point, if your organization is really getting into this conversation about the futures of workforce automation, then you can take things a step further and backcast, working backward from each scenario to the present.  The point of backcasting is to work out how each scenario would actually come about; the output of backcasting is a “future history” that leads one from the present to the future.  For Step 4 you would be working with all four scenarios:

What do you get from this step?  Backcasting sets you up for several benefits:

The above process is but one set of steps you could follow to use scenario thinking in an everyday setting.  This particular process lets you move from a set of quickly identified “scenarios” to more involved conversations in a simple, step-wise fashion, proceeding only as far as you have time and energy for.

To reiterate, this is a very casual use of scenarios, moving slowly from very informal to more formal use of them as centerpieces in a strategic conversation.  There are many methods for generating scenarios in a formal, project-based setting, and for anyone really interested in developing scenario forecasts, I encourage you to read some of our other posts that cover some of the formal scenario methodologies.

“How Do You Handle an Uncertain Future (with limited resources)?”

“Images of Our Robot Futures.”

“3 Types of Surprises to Address in Your Foresight.” 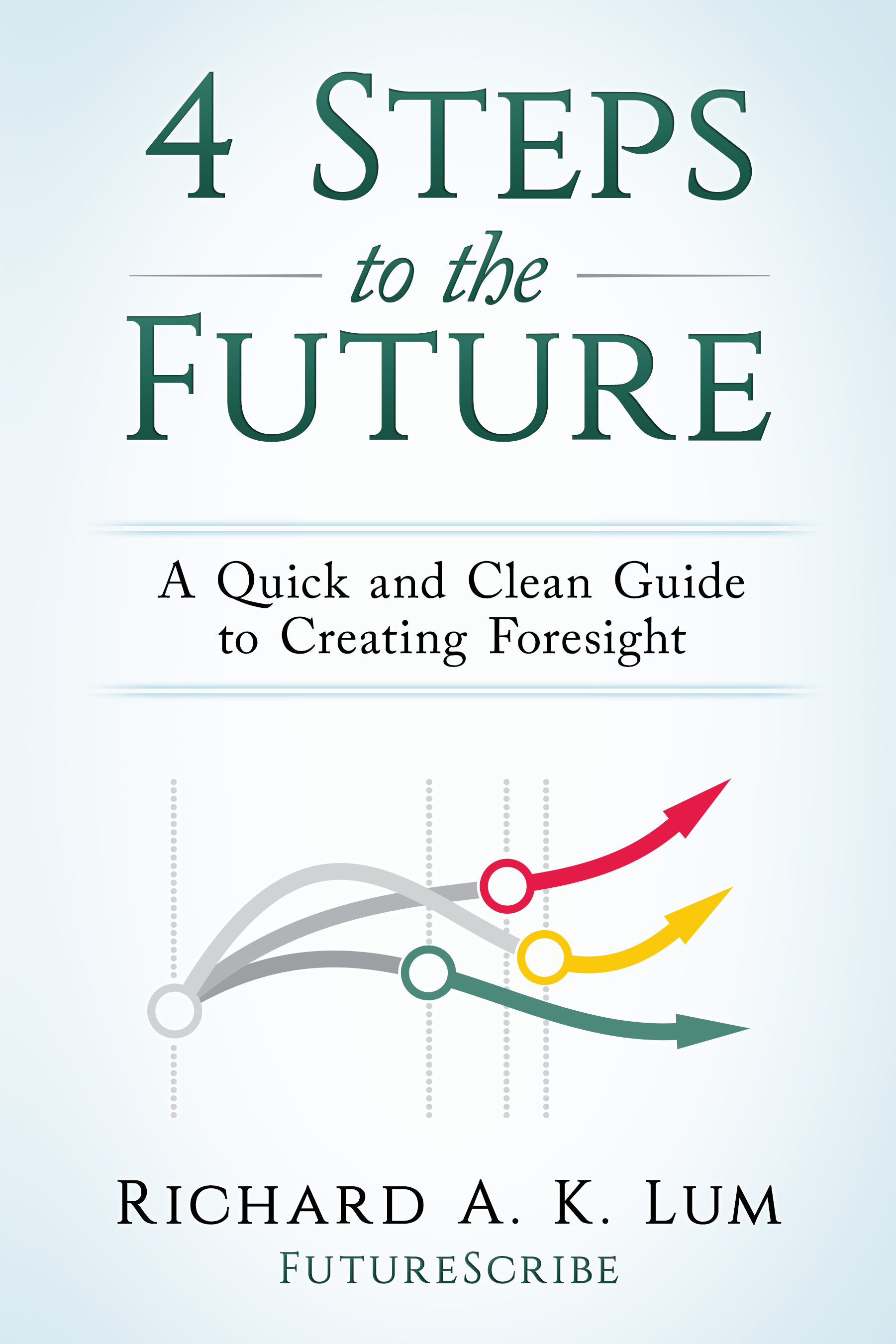